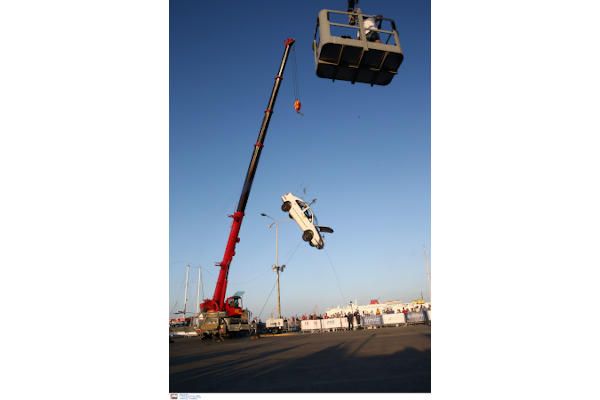 • Simulation of a collision and rescue of an injured passenger, tomorrow afternoon at Zappeion, in the presence of FIA President Jean Todt

The Greek Ministry of Sport in cooperation with Motorsport Greece will demonstrate a crash-test in Wednesday 8 September, at 19:00 local hrs (18:00 CEST), at the “Zappeion Megaron” in Athens, as part of a larger Road Safety campaign which is being organized from early September across some Greek cities.
The event will be attended by the President of the International Automobile Federation, Jean Todt and the FIA Technical Director, Nikolas Tombazis.
According to the schedule, a simulated vehicle collision at 50 km/h will take place. The project is supervised by the NTUA, with Dimitris Koulocheris, professor in charge of the Vehicle Laboratory.
The Olympic champion, Olga Vasdeki, will play the role of the "trapped" driver, emergency number 112 will be alerted, the police will arrive to define the incident area, then the fire brigade to extricate the "injured" and the ambulance to take her to the hospital.
The Road Safety Campaign promotes good experiences with famous athletes as key players. It is based on the FIA's global campaign, #3,500lives, which communicates that every 24 hours 3,500 lives are lost worldwide in road accidents. That is at least two people every minute.
From the Greek side, two videos will be shown for the first time: Olympic rowing gold medalist Stefanos Douskos, starring in the message "Always wear a seat belt in the car, wherever we sit" and Olympic silver medalist and captain of the national water polo team, Giannis Fountoulis, in the message "Always wear a helmet and protectors on the bike".
The event, which will be broadcasted live at https://youtu.be/2-DVhufnbbU is sponsored by EKO and Nea Odos, Central Odos.
The "Road Safety" actions, under the auspices of the Deputy Ministry of Sports, will continue throughout the year until the start of the 2022 EKO Acropolis Rally.
Besides, as the Deputy Minister of Sport, Lefteris Avgenakis, has repeatedly stated, "motorsport and its development is directly linked to positive social attitudes in the areas of safe driving and behaviour. It has been proven worldwide, in countries where motorsport is flourishing. We therefore seek, in cooperation with the FIA, through the EKO Rally Acropolis and the other motoring events we organise in the country, to awaken, raise awareness and spread these vital messages to society."