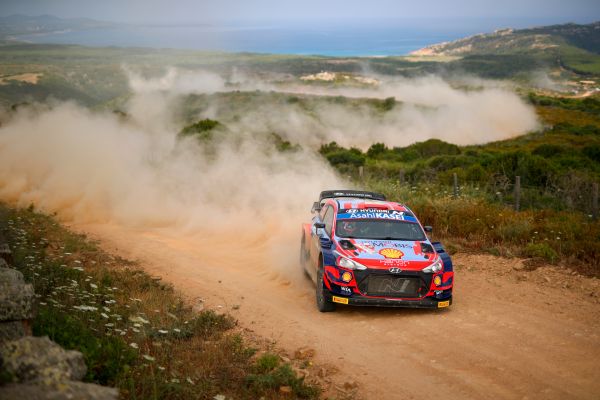 Manufacturer drivers and team principals are looking forward to the start of EKO Acropolis Rally. Read the comments of WRC protagonists.

“It’s great to have the WRC back in Greece. The last time that the Acropolis Rally was on the calendar, I actually won it, and it’s an event that I like a lot myself. You have to really think about your driving because it can be rough in places and the tyre wear is quite high. Some of the stages close to Lamia have not been used for 16 years, so they will be completely new for all of the current drivers. We know that the organisers have been working on the roads quite a lot, and the road condition seems to be much better than in the past. There’s a lot of loose gravel on top, though, so opening the road could be pretty challenging.”

"We welcome the return of Acropolis Rally to the WRC calendar, and look forward to our first participation in this special event. It will be an especially tough challenge for teams and crews, but we have prepared ourselves accordingly and are ready to tackle the stages. I have been proud of the way we have approached recent events. We have been able to perform at a high level and secure results that are more representative of our potential. We must continue in this way and aim to secure as many points as possible in Greece."

“It’s another new rally for Gus and Adrien. We’re expecting faster roads and smoother conditions than we’ve been used to in the past. We start the event with our usual game plan. Gus is targeting a top-five finish and that’s realistic. Adrien will focus first on getting himself back up to speed following his crash in Ypres before aiming for a solid finish. As a team, we’ve enjoyed plenty of success on the Acropolis over the years and we’re all looking forward to a very important event for the WRC.”

“It’s nice that the WRC is going back to Greece. The Acropolis Rally is one of these events which made the history of the WRC, and we’ve missed it now for a few years. It’s definitely a country I love and I’m looking forward to going back there. I know it will be a rally where opening the road will be challenging, but it’s nice to be in the position we are in the championship and we’re going to do everything we can to maintain this gap. That will be our target.”

“I’ve done the Acropolis once before, back in 2012, but that was with a two-wheel drive car. It’s obviously going to be a very different experience going there now. So it’s more or less like going to a brand new rally for me, even though Scott does have a bit more experience there. The route has a lot of stages that will be used just once, which is unusual, and that means there will be a lot of road cleaning to contend with.”

“Acropolis Rally is going to be a tough event. When I was competing there back in 2012 and 2013 it was one of the roughest rallies - together with Argentina at that time. I always enjoyed it. We tested in Greece to prepare for Rally Turkey, so we have some knowledge of the terrain there. Strategy will be very important, but that’s something we like. We have high expectations for another good result, and we are looking forward to it.”

“It’s nice to be going to another classic event in the WRC. I know that previously the Acropolis was always a really tough event. This year, from the videos we have seen, the roads look to be in a better condition than in the past, and I think it’s going to be quite an interesting event. With many stages being driven only once, it’s going to be really important to have a good setup for those first-pass conditions when it’s a bit more slippery, so this was the main focus of our pre-event test.”

“It’s been a long break since the last WRC rally in Greece eight years ago. Acropolis Rally is an event with a lot of history and tradition behind it. It’s an event which belongs to the WRC, and it is good to be back. I think it’s going to be a really nice event; it will be quite demanding, but the stages are really special and flowing. I can’t wait to be back and bring home a good result.”

“The Acropolis is on my list of events I want to do before I stop so it’s a rally I’ve been looking forward to for a very long time. I tend to enjoy rough rallies and I’ve done my best to prepare by watching old footage to get an idea of what it’s going to be like. There are a lot of single-use stages, which means it won’t be as rough as it has been in previous years and we’ll have a good road position. Friday should therefore be a very good day for us and I plan to maximise the opportunities.”

“Acropolis Rally was one of the roughest rallies. Normally the main challenges are the rocky surface, which is really demanding on the tyres and the high temperatures. Our road position is advantageous when we look at the big picture; it is good to start at the back and we will try to make the most of our running order on the first day. It will be the first rally with Cándido alongside me and I hope we can get a good result.”

“Like most of the time, it’s a new rally for me but I do remember playing it on PlayStation when I was younger! Some drivers have some experience, but it was eight years ago and the cars have changed a lot since then. I’m just trying to prepare as I do for the other rallies, working on the videos and my physical and mental training. We had an issue on the last rally in Belgium, so we want to go back to our positive attitude from the beginning of the season and keep taking the experience.”