The new eSports WRC World Champion was crowned in Greece 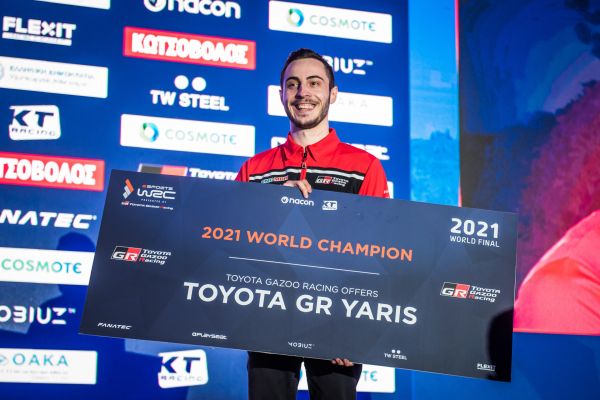 A great day for the eSports world was completed, with Greece hosting the World Final of the eSports WRC for the first time! And it was Lohan “Nexl” Blanc who triumphed in the Grand Final, which was held at the specially designed facilities of the Olympic Velodrome of Athens.

The 22-year-old French gamer won his third world title in five years, after succeeding in the respective events of 2017 and 2019.

The day started with the “Acropolis Rally21 eSports presented by Kotsovolos”, the Greek Final from which emerged the person who took advantage of the wildcard and earned a place in the World Final. That person was the 16-year-old Panagiotis Zeniou.

The athlete from Larnaca, Cyprus was competitive against his clearly more experienced opponents, who had emerged among 15,000 gamers from around the world. He ended up 7th in the semifinals.

The quartet that progressed to the Grand Final competed in the brand-new videogame WRC 10, tackling four special stages: Elva Reverse from Estonia, a throwback to Acropolis Rally in 1987, Querol Reverse from Rally RACC - Rally de España and Kostanjevac Reverse from Croatia Rally.

Nexl led the charge winning the first two stages and, despite the effort of the title-holder, Sami-Joe Abi-Nakhle, he won by 13.231 sec. A success rewarded with a unique prize: a Toyota GR Yaris!

«It is really cool. It was my objective to take revenge for losing 2020’s title, so I am happy», the French commented.

Thus ended a day full of action, with the global elite of eSports giving us a virtual taste of what is about to follow- with the great return of the Acropolis Rally to the WRC!