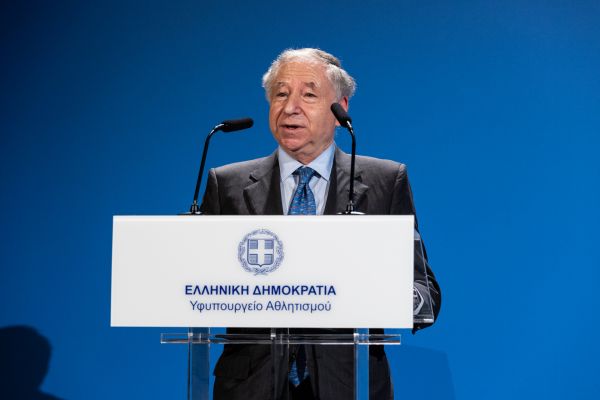 The first phase of the “Road Safety” actions in the framework of the EKO Acropolis Rally culminated today, 8 September, at the Zappeion Hall, with a simulated collision and rescue of an injured person.

During the event -which was organized by the Deputy Ministry of Sport in cooperation with Motorsport Greece and was honored by the presence of the President of the International Automobile Federation, Jean Todt, the Technical Director of the FIA, Nikolas Tombazis, the Deputy Minister of Sports, Lefteris Avgenakis, the Deputy Minister of Citizen Protection, Lefteris Economou, and the Deputy Minister of Infrastructure and Transport, Michalis Papadopoulos-, a simulation of a frontal vehicle collision took place. Specifically, a passenger car performed a free fall from a height of 10 metres, only to hit the ground at a speed of 50 km/h. The project was supervised by the NTUA (National Technical University of Athens), with Dimitris Koulocheris, professor in charge of the Vehicle Laboratory.

Olympic champion Olga Vasdeki played the role of the "trapped" driver. Emergency number 112 was alerted, the Police arrived to demarcate the incident area, then the Fire Brigade to extricate the "injured", and the ambulance to take her to the hospital.

The programme promoting good actions and messages of road safety and behaviour is based on the FIA's global campaign “#3,500lives” and aims to reduce human casualties in road accidents, which reach 3,500 per 24 hours worldwide - that is at least two people every minute. According to the Hellenic Statistical Authority, in 2019, there were 10,712 road traffic accidents in our country that caused death or injury to people, while around 700 people lose their lives on the asphalt every year, not counting deaths due to traffic accidents.

Deputy Minister of Sport, Lefteris Avgenakis, reiterated the Greek government's determination to reduce road accidents and to spread the vital messages of safe driving and behaviour, since, as he said, "there are no discounts on road safety issues". In his speech he said, among other things: “Our government's goal is to improve - and we are improving all three areas every day”, while he praised the role of motorsport, noting that “countries with developed motorsport have the lowest rate in road accidents and crashes. Simply put, motorsport automatically leads to a reduction in road accidents”.

Jean Todt, President of the International Automobile Federation, said: “Every year, 1.4 million deaths are recorded in road accidents worldwide. We know how to prevent them, and the Acropolis Rally is a workshop for promoting safe driving messages. I would like to express my admiration and support for the efforts of the Greek government to improve road safety. I am here to help you!”

FIA Technical Director, Nicolas Tombazis, was particularly excited about the return of the Acropolis Rally to the WRC calendar, focusing his speech on the transfer of technology from motorsport, and particularly from F1 to the road, with the aim of reducing road accidents. “The FIA as a regulatory authority promotes innovation”, he said, citing the example of the development of a helmet specifically for less affluent countries, which meets all modern standards and costs just €17.

On the issue of road safety education and behaviour, the Ministry of State for Sports plays an extremely important role, drawing on sport, our Olympic winners and champions. In this context, two road safety messages were shown during the event. In the first, Olympic rowing gold medalist Stefanos Douskos stresses: "Always wear a seat belt in the car, wherever you sit", while in the second, the captain of the National Polo team and Olympic silver medalist, Yannis Fountoulis, reminds: "We always wear a helmet and protectors on the bike".

The "Road Safety" actions, under the auspices of the Deputy Ministry of Sports, will continue throughout the year until the start of the next EKO Acropolis Rally. The event was sponsored by EKO and Nea Odos - Central Road.