EKO Acropolis Rally 2021: This was only the beginning! 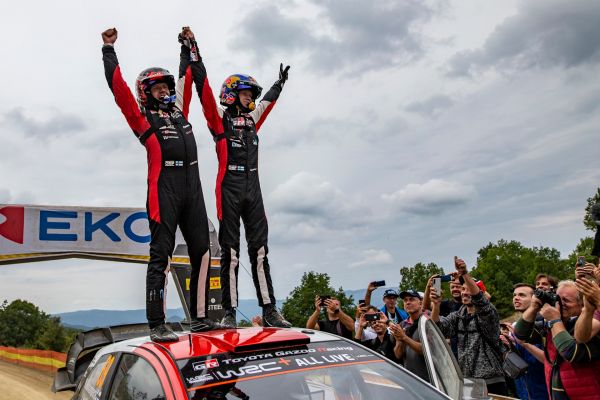 Kalle Rovanpera is leaving Greece as the winner of EKO Acropolis Rally, having written his name in the pages of the history of this legendary rally, and at a year that the foundations were laid for a more secure future.

A few days ago, FIA’s President Jean Todt described EKO Acropolis Rally as «… part of the history of rallying, of the FIA World Rally Championship and motorsport». Both competitors and spectators did their best to confirm this statement, certifying the uniqueness of the Greek rally. The epic battles of the protagonists, witnessed by tens of thousands of spectators, composed an explosive mixture of passion, excitement and intense emotions.

The same emotions overwhelmed every motorsports fan, when the Deputy Minister of Sports, Lefteris Avgenakis, announced from the finish ramp that the FIA and the WEC Promoter recognized the perfection of the EKO Acropolis Rally and proceeded to extend the agreement for hosting a WRC round until 2023! It is reminded that the initial agreement was for two years, and especially seasons 2021-2022.

In complete harmony with the reputation of an unpredictable and full of surprises rally, the 20-year-old Kalle Rovanpera (Toyota Yaris WRC) added his name to the pantheon of the “Rally of the Gods” history, as the youngest ever winner; and, in fact, in his first presence on Greek soil. This is just his second victory in a World Rally Championship round, after the one in Estonia two months ago. Maturity, composure and above all, consistency in performance, were the characteristics of his driving throughout the EKO Acropolis Rally. Even today, on special stages that were quite different due to the recent downfalls, the Finnish driver managed to maintain his lead, plus setting the fastest time on the Power Stage, which gave him the maximum of 30 points.

After an equally exciting rally, Ott Tanak (Hyundai i20 Coupe WRC) secured second position, despite the problems he faced. In his case, the right choice of tyres proved crucial and gave him an advantage over the other contenders of the victory. Behind him, Sebastien Ogier (Toyota Yaris WRC) put his vast experience in use and didn’t do the mistake of following the frenetic pace of Rovanpera and Tanak. Instead, he preferred to secure the points of the third place, which allowed him to establish himself at the top of the World Rally Championship standings, 44 points in front of the second-placed, Elfyn Evans (Toyota Yaris WRC). Not being totally satisfied with his performance and pace during the rally, Dani Sordo (Hyundai i20 Coupe WRC) was limited to 4th place of the overall classification, more than 3 minutes behind the winner. Gus Greensmith (Ford Fiesta WRC) and Elfyn Evans completed the Top-6.

With the 6th position at the EKO Acropolis Rally and the 4 extra points as a result of the second fastest time in the Power Stage, the Welsh driver gained a 6-point advantage over Thierry Neuville (Hyundai i20 Coupe WRC) in the World Championship standings. The Belgian driver faced various mechanical problems during the first day, which didn’t allow him to claim a position higher than 8th, behind Adrien Fourmaux. The French gained valuable experience in Greece behind the wheel of the Ford Fiesta RS WRC of M-Sport and, without today’s spark plugs problem, he could have finished even fifth!

Andreas Mikkelsen won in the WRC2 category, driving the Skoda Fabia evo Rally2 of Toksport. The Norwegian had a great fight with his team mate in the German Team, Marco Bulacia, and made a significant step towards the category’s title. This is also the case with Yohan Rossel (Citroen C3 Rallye2), who embraced the Championship in the WRC3 category by winning for the fourth time this season. However, it is noted that at this time, his position remains doubtful, as a decision of the stewards after the report of the technical delegates is pending.

Regarding the Greek crews, Georgios Kechagias finished ahead from everyone with another Skoda Fabia evo Rally2. He was 20th in the overall classification and 5th in the WRC3 category. In fact, a flat tyre today cost him valuable time, something that Panagiotis Roustemis tried to take advantage of, driving a Citroen DS3 Rally2, but without success, as he had to settle with second place. In the informal Greek classification, the Top-3 was completed by Jourdan Serderidis, who participated in the rally with a Ford Fiesta WRC ’19 of M-Sport.

As of today, the EKO Acropolis Rally 2021 goes down in history, which could not have become a reality without the valuable help of the volunteers, the Red Cross, the Greek Police, the Fire Department and the Greek National Center for Emergency Care (EKAV). Today, the lights in the Panhellenic Exhibition of Lamia will “turn off”, but the EKO Acropolis Rally’s position in the calendar is secured for the next years. Just like this iconic rally deserves.