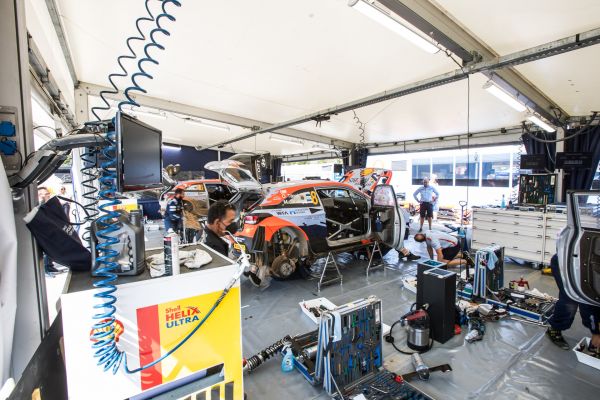 “It’s been OK, this morning maybe too much on the safe side, but at the end it was better. My main target is still reachable. It would be a great step towards the title if we could secure a place on the podium. Of course my team mate Kalle was much faster today. When we saw the level of attack and his speed, we would not risk to fight with him, this is not what we need for the championship. If Kalle wins, it would be a big step for the manufacturers’ title. It’s not worth it for us to fight for the second place, to take the risk for 3 points. For sure we will keep a good rhythm, keep the pressure and you never know, tomorrow is the longest stage of the rally, so it’s not over”.

“We did good in terms of pure speed. It’s obviously important to take those few points, we need to try to focus on tomorrow. I hope we have enough soft tyres to push in the Power Stage”.

“We are close to our target, we had more equal conditions this afternoon, it was simpler for us to get some speed. This morning the R5s were faster than us due to the cleaning effect, in the afternoon we had to push a little bit more. Forty seconds left for tomorrow, we have to catch these two cars tomorrow and then we have to see what happens in the front. If there is no retirement in the front, it will be a really disappointing weekend for us”.

“When we made some changes for protection, we lost quite some traction. Maybe it wasn’t the right choice, so it made it a little bit more difficult, but still it was quite good. It’s never better to be slower, but we were wise and not doing anything stupid. Tomorrow is so long, it’s better to have more margin than less. Still a long run to the end of the rally”.

“We have been working hard and trying to find some solutions, at least with the tyres. We’ve been a bit more extreme, different to Toyota, the pace was at least the same, let’s see tomorrow. So far that was the maximum we could do. I’m hunting for more pace, we’d like to have more confidence with the car. I’m not sure we can do much, but I’ll do my best and let’s see. Still some tricky stages, everything is possible”.

“Better than yesterday for sure, the pace has been better. I hoped to take a bit more out of the first stage, but we had some small issue with the brakes, so I had to sort that out. Generally a positive day”.

“Quite difficult day, we were fighting for nothing, we were not strong in these conditions, there were some very slippery places, I don’t feel very comfortable. I feel I’m not driving like yesterday, clean and nice. I won’t push for nothing because the guys in front of me are much faster, the back is quite OK, so we only need to keep our position”.

“It was a frustrating day, I wanted to have a better pace in the stages, I was struggling a bit. I just don’t have the confidence on my pace notes, it was quite difficult during the Recce with the fog, so I wasn’t able to push today. The times were quite far from the fastest, so I’m not happy. Tomorrow we will try to keep the fifth position and to improve our pace”.

“It’s been a long day, unfortunately in the last stage I stuck in a hairpin. A long day but a nice one, so I hope we will continue like this tomorrow”.

“Νot bad, we were expecting more slippery and muddy conditions. We got damp and then dry conditions, especially in Eleftherohori, which I enjoyed a lot. We had a good day, we didn’t push, but we are still improving”.