EKO Rally Acropolis 2021: As tough as ever 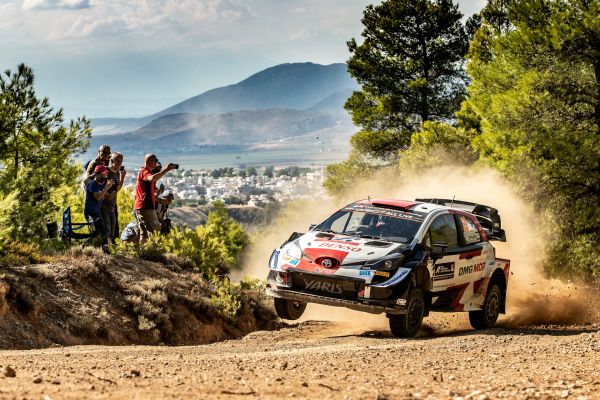 Yesterday’s festive atmosphere went down in history, with today’s, first proper racing day of the EKO Acropolis Rally, verifying the unique character of the rally.

It only took a couple of special stages, for crews, teams and spectators to remember or learn, why the Acropolis Rally is considered as one of the toughest and most iconic rallies of the World Championship.

A marathon of almost 500km, begun early in the morning from the heart of Athens and ended in the city of Lamia, where the EKO Service Park is situated. In between, drivers, codrivers and cars, were tested to the limit of their abilities, when they were called upon to overcome the obstacle of five legendary special stages, facing from early on the demanding side of the rally.

Against this challenge, three drivers managed to shine! Kalle Rovanpera (Toyota Yaris WRC), Ott Tanak (Hyundai i20 Coupe WRC) and Sebastien Ogier (Toyota Yaris WRC) are leading the general classification, separated by only 3.9secs. Something extremely unusual for a rally as tough as the Acropolis.

However, an even bigger surprise is the fact that in a rally where a huge amount of experience is required, a 21-year-old driver has managed to be in charge at the end of the day. Kalle Rovanpera was extremely fast against more experienced drivers – even after a series of events that had him start the stages second, right after Sebastien Ogier.

The French 7-time World Champion and the Estonian Ott Tanak, were the two drivers that managed to keep in contention for the win. And with an exceptional time in SS6 “Elatia”, he managed to overtake Ogier, to finish the leg in second place, even though he was not at all satisfied with the Hyundai i20 Coupe WRC throughout the day. As he mentioned, he wasn’t feeling confidence behind the wheel.
On the other hand, once again Ogier demonstrated his experience and excellent strategy. Despite opening the road, thus having a significant disadvantage, he has remained in shooting distance from the top.

He bounced back in SS5 “Thiva”, choosing the most suitable tyres and he is well in contention for the win. Dani Sordo (Hyundai i20 Coupe WRC) managed to avoid problems with the sole exception of the 10sec penalty for a jump start. He is placed 4th. Further back, M-Sport’s two Ford Fiesta WRCs complete the Top-6, with Adrien Formaux dominating the internal battle against Gus Greensmith. Of course, beside the small gap to the top, Sebastien Ogier has more reasons to smile, as his two main rivals in the title chase, were the ones that faced the most important problems today.

His teammate, Elfyn Evans, faced a gearbox problem throughout the day, while Thierry Neuville (Hyundai i20 Coupe WRC) initially lost time due to an electrical problem and then, even more time when his i20 WRC lost power steering. They both returned to Lamia, but now their hopes for a good result have vanished.

There were thrilling battles in the other categories, especially in WRC2. The 20-year-old Marco Bulacia, who is leading having edged the far more experienced Andreas Mikkelsen, who is also participating with a Skoda Fabia Rally2. The other contender for the title, Mads Ostberg (Citroen C3), faced transmission problems and had to retire. Oliver Solberg (Hyundai i20 N Rally2) had the same fate, due to suspension failure.

As for the Greek participants, George Kehagias with the Skoda Fabia Rally2 is first among the crews, having some very competitive times at WRC3, lying 6th in the category’s classification. He is followed by Jourdan Serderidis with the Ford Fiesta WRC ’19, while Vassilis Velanis (Skoda Fabia Rally2) completes the Top-3. Among the unlucky drivers of the day, are Lambros Athanassoulas (Hyundai i20 N Rally2) and Alexandros Tsouloftas (VW Polo GTI), who had to retire due to steering arm and suspension, respectively.

Tomorrow, the rally will head to the mountains of Fthiotida, on some of its most legendary special stages, that are expected to consist an even greater challenge for the crews. Especially taking into account the fact that the road surface will be significantly different, compared to the recce, when it was raining.

Press here for high resolution photos from the second day.

Press here for the itinerary of the third day.