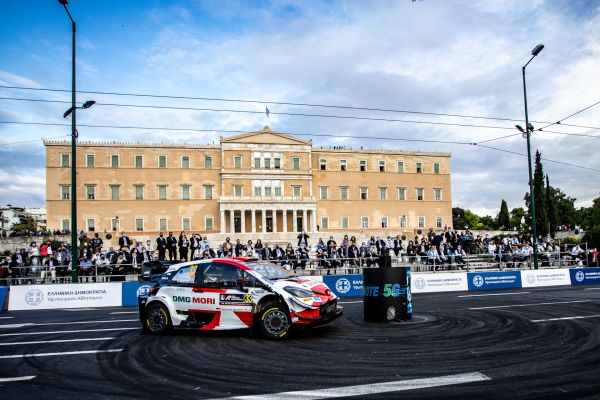 Anticipation for EKO Acropolis Rally ended with the Ceremonial Start at the foot of Athens’ towering Acropolis. In the presence of the Prime Minister of the Hellenic Republic Greece, Kyriakos Mitsotakis, the most important sporting event recently organized in the country received the "green light" with an unprecedented spectacle even for the World Rally Championship.

WRC elite drivers, as well as the protagonists of Greek Rallying, crossed the start ramp, marking the rebirth of an institution so familiar and for so long missed by motorsport fans all over the world. Prime Minister, Kyriakos Mitsotakis, honored EKO Acropolis Rally with his presence and by waving the start to seven-time World Champion, Sebastien Ogier, who was the first driver to climb at the ramp. The "baton" was successively taken up by FIA President, Jean Todt, and Deputy Minister of Sports, Lefteris Avgenakis, who has strongly believed in the potential of our country to make a comeback at the top Rally championship in the world. Subsequently, the start of the following crews was given by Minister of Finance, Christos Staikouras, Minister of Development and Investment, Adonis Georgiadis, Government Representative, Giannis Economou, Regional Governor of Attica, Giorgos Patoulis, and Mayor of Athens, Kostas Bakoyannis.

A few moments before the Ceremonial Start, Mr Mitsotakis and Mr Avgenakis were photographed with Priority 1 drivers, in another gesture of support to the FIA road safety campaign #3500LIVES.

Furthermore, the Ceremonial Start was honored with the presence of important State representatives, as well as sponsors of the rally.

Instantly afterwards, rally cars were directed to Syntagma Square, for the event which has drawn all attention lately: COSMOTE 5G Athens Stage, the first special stage of the rally, that literally highlighted Greece in every corner of Earth. An almost otherworldly image, with rally cars in front of Greek Parliament, in a scenery that could be part of a cinema film.

The heart of Athens beat loudly, as cars were battling against the clock creating a unique spectacle. For the first time in its history, the rally "crossed" the centre of Greek capital, around Syntagma Square, which was shaken by the sound of engines and flooded with the smell of tyres.

The huge crowd that spontaneously embraced the pioneering project created a festive and unique atmosphere, making perfectly clear that the "Rally of the Gods" has returned home.

"The spectators gave us a boost for this first stage," quoted Sebastien Ogier, who set the fastest time (51.5 seconds) of COSMOTE 5G Athens Stage, just 0.6 sec in front of Elfyn Evans and 0.8 sec in front of Kalle Rovanpera.

The Greek rally's return to the World Rally Championship couldn't have been more emphatic. The follow-up of the event is expected as exciting, whilst everyone's attention for the next three days is turning to the Greek mountains. For more than 290 kilometers in 14 demanding special stages, competitors will give the ultimate battle against the clock, targeting the top step of the podium at EKO Acropolis Rally, the toughest WRC rally.